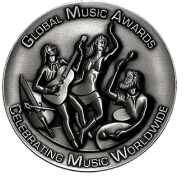 We're happy to announce that Love's Tango has been awarded a 2019 Silver Global Music Award for Outstanding Achievement in the album & lyrics/songwriting categories.

Bisantz & Nakhimovsky have recorded, performed and toured together since 2005. This is their third recording project together and first writing collaboration. They share a love of classical music, Latin rhythms and jazz harmonies, and a serious playfulness that has distinguished and energized their partnership. The CD features, along with many accomplished musicians, renowned trombonist Steve Davis and smooth jazz guitarist Norman Johnson.

LOVE’S TANGO celebrates the many ways we experience love - romantically, exuberantly and philosophically.

In the words of Adjoran Horvat, Staccatofy, “Bisantz has a low burn sensuality that percolates with assuredness and sophistication, and Nakhimovsky is genius with his colorizations of the melodies. Delightfully witty lyrics, paired with music that enlivens the senses and lightens your heart. An engaging listen from start to finish, Love’s Tango is a recording of urbanity and splendor.”

Pianist ALEX NAKHIMOVSKY enjoys a versatile career as a performer, recording artist, producer, composer and educator. His musical accomplishments as a jazz and classical artist include musical direction, arranging, solo and ensemble performances.

Tickets and More Information
Update Required To play the media you will need to either update your browser to a recent version or update your Flash plugin.
Download Download
Back
You Tube